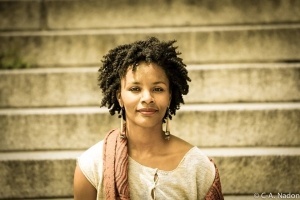 Gessica Généus began her career as an actress at age 17, with Richard Sénécal’s feature film, Barikad. She then collaborated with many Haitian and international directors. She played in the TV movie dedicated to Toussaint Louverture, directed by Philippe Niang and produced by France 2.

In 2010, after the earthquake, Gessica seeks to become involved in the reconstruction of her country, and works for the United Nations. With 70 young social workers, she accompanies Miyamoto, a Japanese company specialized in anti-seismic constructions, as well as the engineers of the Ministry of Public Works in the evaluation of the buildings, in the most disadvantaged places of Port-au-Prince, in order to to identify potential beneficiaries of the emergency shelter program launched by one of the UN agencies, UNOPS.

In 2011, Gessica won a scholarship at the Acting International in Paris. Back in Haiti, she created her production company, Ayizian Productions, to develop her own projects.

Between 2014 and 2016 she directed Vizaj Nou, a series of documentary films of about fifteen minutes that portray major figures of contemporary Haitian society (Anthony Pascal says Konpè Filo, Viviane Gauthier, Odette Roy Fombrun and Frankétienne), in collaboration with the Caribbean Television.

In 2017, she directed Douvan jou ka leve (the day will dawn), co-produced with France Télévisions. This film wins seven awards and continues to be the subject of numerous screenings around the world.

She is currently preparing her first feature film for fiction with the film Freda.