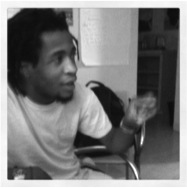 Hermane Desorme is a couturier, poet and film director, born in Jacmel, south west of Haïti in 1988

2016 – Academic Drawing classes  at the center of Art of Port-au-Prince. (Le CENTRE D’ART)

2014/2015 – Writers of documentary  in Residence program in the French Guyane dans for the international meeting of the Documentaries movies of the Amazonie Caraïbes zone , for « GADE ! »  and  « Tambour nan won».

2012 – Exhibitions of collective sculptures with Lissa Janot, Ronald Mevz, John Charles, at the Alliance Française de Jacmel, and at the  Galery Monin of Petion Ville.

2013 – co-director with  Maxaens Denis for the the short documentary film « Haïti royaume de ce monde », inspired by the great international exhibition of the same name.

2008 – Herman joins the Art center of Jacmel FOSAJ Where he creates his first artistic work like paintings or sculptures and start other artistic and professional formations. Those formations are going to make his participation to other exhibitions made by the cultural center possible.

Creator od the association Lakou, cultural association on the defense of the rights of the minority.

2007 – Creator of the theatrical troop  Zantray witch became an important cultural event at  Jacmel, with the troop he co-directed with the team of  Alliance Française of Jacmel a show called ‘Tambour nan won’’ around Haitian drums.

Méli-Mélo, Fiction short film On the complexity of the religion in Haiti, Ciné Institute.