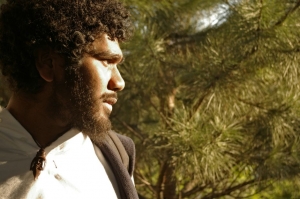 Nunë Luepack is from Lifou and grew up near Bourail. He went to school there until the end of middle school. He spent most of his holidays on the Lifou island. In 2000, he moved with his family to the “capital”, Nouméa.

In 2001, his father has to go for a two years training at the National School of Public Health, at Rennes. All the family goes to the Metropolitan France : his parents, his three sisters, and himself. After the training, the parents come back to their homeland. They prefer to push their children to follow their studies in mainland France. Nunë graduates at Rennes but fail to obtain his bachelor’s degree in civil engineering.

In 2005, he followed a training to have a sport instructor patent. It opens him the doors of the associative. The same year, he takes part to the creation of an association for the development of oceanian cultures. He is one of the organizers of the festival “Sons et Gestes d’Océanie” (“sounds and gesture from Oceania”). His passion for cinema is confirmed, with the idea to defend his homeland.

In 2007, he registers to the Rennes University for a literary diploma wich could permit him to integrate l’Ecole Supérieure de Réalisation Audiovisuel (ESRA) of Rennes (a school of audiovisual production).

At the same time, he finds out he is eligible for the Conservatoire Libre du Cinéma Français (CLCF – the Free French Cinema Conservatory), a private school with contest entry. He tries and succeed.